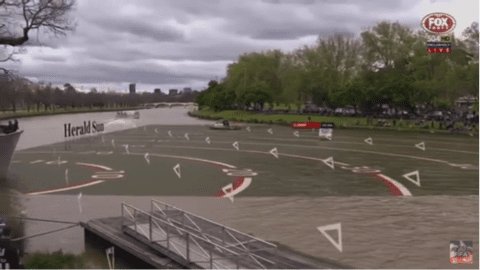 Once per year, eleven players from the Australian Football League and a lucky 12th participant compete in the FOX FOOTY Longest Kick, where the goal is to kick a football 75 meters across the Yarra River. Each contestant has two chances, and the longest kick wins!

The event was covered by Champion Data, Australia’s top provider of sports statistics and media services, and the official provider of live and post-game services for the Australian Football League since 1999. Champion Data enhances the viewer experience by adding intuitive graphics over live footage of sports events, giving enhanced visibility of all factors affecting the competition.

Of course, wind direction plays a very important role in a competition like the FOX FOOTY Longest Kick: depending on how the ball is kicked, the wind may either halt it or help it go further, possibly defining a winning kick! Wind measurements can also make the competition more interesting, allowing spectators to appreciate their effect on kicks, but this requires them to be displayed in a format that is intuitive and easy to read.

Champion Data needed a reliable wind monitoring solution for the competition, capable of overlaying wind direction graphics on top of live footage from the competition site. They contacted WINDCRANE, who delivered a system which provided Champion data with the live wind data they needed.

This technology adds strategic depth to the competition, transforming the wind from a random variable into a measurable factor making the event more interesting for viewers. This year’s winner was Bryce Gibbs from the Carlton Football Club, who was his team’s third best goal kicker during the last season.

WINDCRANE once again proves its versatility, having been deployed in applications that include sports, construction, transportation and even aviation shows. WINDCRANE is built on the expertise of Logic Energy, a Scottish company with a decade of experience providing weather and energy monitoring solutions, offering know-how in both software and hardware to provide integrated systems that are tailored for the needs of each client.

Making Streets Safer: Measuring the Effect of Buildings on the Wind
Scroll to top